The Paramount Chief of Oguaa Traditional Area, Osabarima Kwesi Atta II has suggested to the Forestry Commission to as matter of urgency make tree planting a monthly exercise to sustain lives.

“I have a problem with this once in a while tree planting, hence this must be done regularly because there is a saying that when the last tree dies we all die” he lamented.

“God in his own wisdom put us human beings, trees and rivers in one place to complement each other to sustain our lives”. 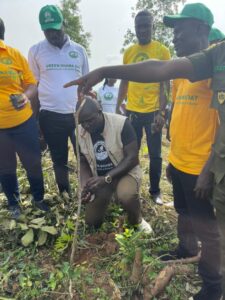 It was under the theme; “Mobilising for a Greener Future Green Ghana day: let’s go planting 20 million trees today”.

He again appealed to the Forestry Commission to spread the tree planting to every corner of the Central Region and not only in one place to help the trees to grow around us.

Briefing the media shortly after the exercise, the Central Regional Manager of the Commission, Mr. Michael Pentsil said his outfit distributed 1.6million seedlings in the Central Region and appealed to the general public to embrace the tree planting exercise to enable the commission achieve their aim.

The Management of the Forestry Commission also stormed Jukwa Krobo in the Hemang Lower Denkyira District to join the Catholic Church to plant trees.

Prof Nyarko Boampong further stated that most of UCC students would be involved in the tree planting exercise.